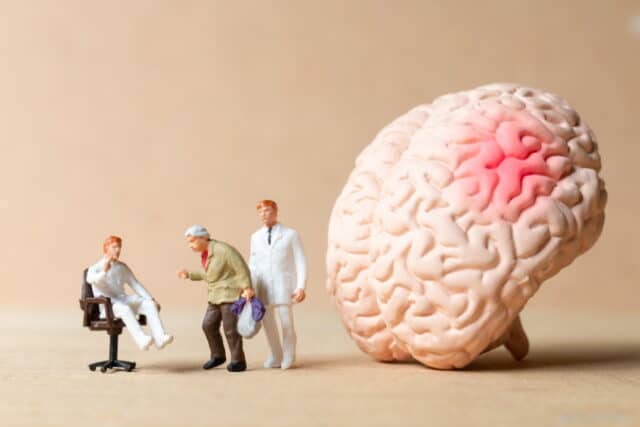 A new study in mice suggests that the symptoms of apathy observed in AD could be caused by the abnormal expression of a receptor for the neurotransmitter glutamate in a brain region associated with motivation.

Notably, the deficits in motivated behaviors could be reversed by using a blocker for the receptor, suggesting that this receptor could be targeted to treat the aforementioned neuropsychiatric symptoms.

The new findings are published in the journal Molecular Psychiatry.

Deficits in cognitive function, including memory, learning, and executive function, are hallmarks of AD. These cognitive deficits are thought to be associated with the accumulation of the amyloid-β (Aβ) protein in the form of plaques in the brain.

The Aβ plaques are made up of chains of repeating protein subunits called Aβ monomers. These Aβ monomers aggregate to form short chains called oligomers, which subsequently assemble together to form fibrils and eventually insoluble plaques.

Scientists previously regarded Aβ plaques as the causal factor underlying the development of AD. However, recent studies suggest that the soluble Aβ oligomers are more toxic and could be primarily responsible for causing damage to brain cells or neurons.

The decline in cognitive function in AD is associated with the loss of synapses, which are points of contact between neurons where transmission of information occurs from one neuron to another.

Studies have shown that Aβ oligomers can lead to the dysfunction of synapses involving glutamate, the major excitatory neurotransmitter in the brain.

In addition to the decline in cognitive function, individuals with AD also show symptoms of depression, anxiety, and apathy or lack of motivation. These neuropsychiatric symptoms appear before the signs of cognitive deficits become evident and worsen as the disease progresses.

However, the neurobiological mechanisms underlying these neuropsychiatric symptoms are not very clear. To better understand the mechanisms behind AD-associated apathy, the study’s authors focused on the nucleus accumbens, which is a brain region involved in motivation.

Thus, Aβ oligomers could potentially lead to symptoms of apathy by causing a loss of excitatory synapses, similar to that seen in brain regions involved in cognition.

The researchers injected Aβ oligomers into the nucleus accumbens of mice. They found that Aβ oligomers reduced the motivation of the mice to earn rewards and to counter unpleasant experiences.

Moreover, the reduction in motivation in animals injected with Aβ oligomers was accompanied by increased levels of a glutamate receptor subtype called calcium-permeable AMPA (CP-AMPA) receptor.

The researchers found that blocking the CP-AMPA receptor reversed the decline in motivation in mice injected with Aβ oligomers.

In subsequent experiments using studying brain slices, the researchers found that the increase in CP-AMPA receptors caused by Aβ oligomers resulted in the degeneration of glutamatergic synapses in the nucleus accumbens.

In sum, these results suggest that Aβ oligomers induced the abnormal expression of CP-AMAP receptors in the nucleus accumbens, resulting in the loss of synapses and reduced motivation.

Until recently, scientists thought that the NMDA receptor, another major type of glutamate receptor, was responsible for the loss of synapses in AD.

However, drugs that block the NMDA receptor either produce unacceptable side effects or have had limited success in reducing AD symptoms. This suggests that the NMDA receptor may not be the primary cause of synaptic loss.

The present study shows that blocking the CP-AMPA receptor could reverse the loss of synapses in the nucleus accumbens and the deficits in motivational behaviors.

Unlike the NMDA receptor, the CP-AMPA receptor is not expressed in the brains of healthy adults and could thus provide a promising therapeutic target for reducing AD symptoms.

“However, limited symptomatic relief in AD patients by available medications demonstrates a lack of understanding of the neuronal substrates of AD, especially the AD-associated neuropsychiatric symptoms,” he said.

“[These findings] provide a potential new biological target for improving the life quality of AD patients, particularly those who are also suffering from detrimental neuropsychiatric symptoms.” — Dr. Yao-Ying Ma

Dr. Denis Selkoe, a professor of neurology at Harvard Medical School, noted that these results further support the role of Aβ oligomers, instead of plaques, in causing synaptic dysfunction in AD.

“This study shows that Aß oligomers alter synaptic biochemistry in certain ways in this region, and correcting this is beneficial. This is another piece of evidence that regardless of which synapses, which brain regions, and which specific molecular mechanisms mediate the negative effects of Aß oligomers, it is important to lower the levels of these synaptotoxic assemblies of a peptide (Aß) that is harmless in its monomeric form.”

MedicalNewsToday, posted on SouthFloridaReporter.com, May 10, 2022