After 2+ decades of driving new cars each week, I admit, you can get pretty jaded.  So it’s rarer now that I get really wowed when a car is delivered but that’s happening right now. 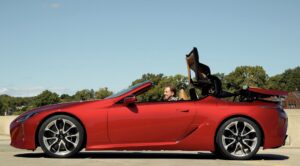 I mean, just look at this thing.  The LC is already a gorgeous car but make it a convertible and paint it red like this and all of a sudden I’m a teenager again at Spencer Gift’s buying the poster because the Lexus LC 500 Convertible is as close as it gets to a rolling piece of art. 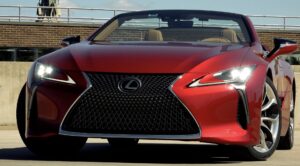 There’s been a design renaissance in the automotive world as of late where bold, ornate styling is found on everything from family sedans to 3-row SUVs.  Bland is definitely out and in the case of Lexus, none too soon. 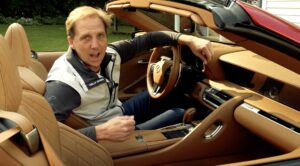 From stodgy to spectacular, their lineup has been completely transformed in recent years culminating with the most fashionable piece they’ve ever crafted: the LC Convertible.

In a red so rich it looks like it’s been faked with filters, the drop-top LC and its oversized wheels, mesmerizing grille, and Aston Martin-esque backside draws attention like few other cars can. 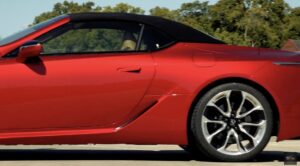 And that’s before you start it.  It’s not often we get to hear unfettered V8 sounds anymore, especially in this class of car, but the 5.0 can steal the show if given the chance.  Turbos be damned; this is what we want to hear and with engineered sound enhancements into the cabin, it stimulates the senses even more from inside.

Lexus catches a break here with this naturally aspirated V8.  And what I mean by that is their penchant for letting things age a little too long actually plays into their favor with the LC. Nobody is doing this kind of engine anymore which makes it a refreshing alternative to turbopalooza.  And the sounds are V8 heaven.

You can trace this engine’s roots to the 2007 IS F and here it produces 471 horsepower and 398 pound-feet of steady, organic torque.  It drives the rear wheels through a 10-speed torque converter automatic though one with dual-clutch like shifting quickness, paddle shifters, and various drive modes.

Its bark may be worse than its bite but this is still a quick car and considerably fun to drive when in Sport S + and the top down.  Zero-to-60mph takes 4.6 seconds – about the same as an AMG E-Class Cabrio and does it with some fanfare. 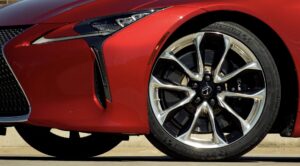 No squealing tires but keep your foot in it and the exhaust really comes alive.  There is an adaptive suspension that adjusts to driving style and road surfaces – and of course, you can lock it in with the drive settings – but the ride quality is surprisingly not Lexus-like.  Despite numerous means to enhance the overall structure and retuning the dampers and springs for the added weight, the Convertible just handles itself a little less gracefully than expected.  Impact harshness is high and if you hit a bump mid turn the body shudders as the car briefly loses grip. 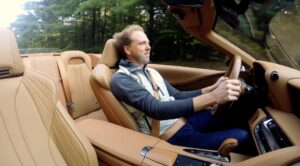 Just so you’re aware, the LC is not a sports car…this is a grand tourer in the greatest sense.  This is all about a beautiful autumn day, top down, companion in the passenger seat, neck heater blowing, and the intoxicating sounds of the V8.  The huge 21” wheels and high performance tires ding the ride quality a bit and overall the suspension doesn’t feel as sophisticated as you would like so driving it with verve is more pleasing when the road isn’t too twisty.  Next to the 911, I’m also testing this week, this is the car that’s been grabbing all of the attention, and taking it out for long country drives has been an absolute pleasure. 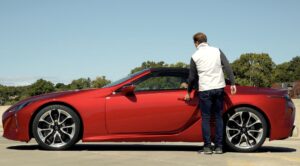 The convertible top is well insulated so for times when it’s up this car is Lexus quiet.  But it’s not turbulence-free when down through the rear windscreen helps some.  Still, a conversation is easily accomplished and the roof and window operations are quick and simple.  For day trips on backroads with the top down, this LC has been stellar.  Just one complaint – the typically excellent Mark Levinson stereo doesn’t have the firepower necessary for open-air driving even though Lexus says it automatically compensates for just that. 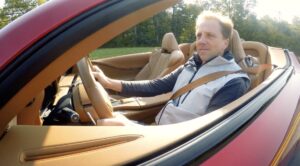 Choosing Infrared for the exterior is a no-brainer, but I’m not so sure about this Toasted Caramel for the interior.  I think I’d go with Black. Otherwise, this is the flashy, designer cabin you’d expect in a car that looks so upscale.  The infotainment can be a little maddening per Lexus usual, but the Climate Concierge feature that automatically heats or cools you is so perfect for a convertible. 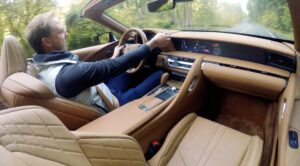 It heats or cools you when and where it’s needed without having to go through the on-screen settings, including the Mercedes-like neck scarf. The front seats are appropriately comfortable but the rear seats are virtually void of legroom so this is not an S-Class Cabriolet.  And there’s just enough trunk space to get out of town for a couple of days. 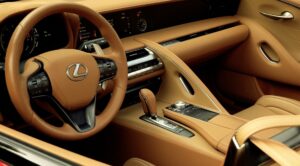 But with an as-tested price of just under $112,000 which is fully loaded, I’d appreciate a little more excess to go with this striking interior.  Massaging seats, selectable ambient lighting, exciting gauges, and displays  – you know, the little stuff the Germans do in their cars – all absent here.  No wireless CarPlay either though wired connectivity is here including for Android Auto. 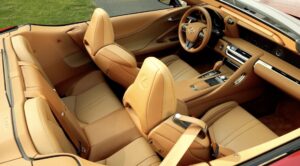 Maybe because I live where summer-like weather lasts for only a few months, I love convertibles, and the showier the better.  And this Lexus makes for the ideal sunny skies weekender as long as you can handle all of the attention.