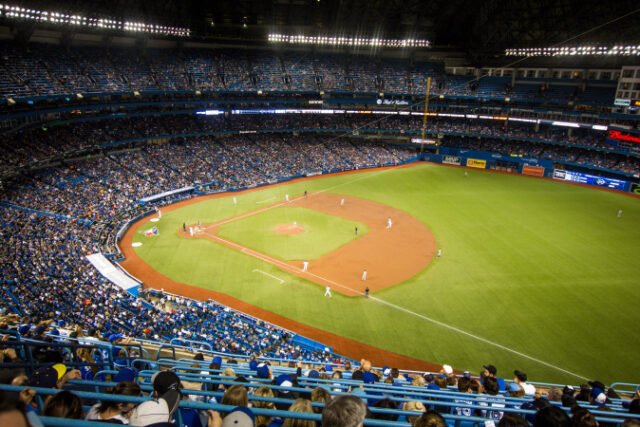 As thrilling as it is to see a grand slam or a phenomenal catch, what would a ballgame be without the amazing ballpark foods?

Probably not nearly as fun.

Whether you’re planning your dream baseball trip to a famous park, staying local, or watching from your couch — use these best ballpark foods as inspiration for what to eat while watching the game. And don’t forget to keep your finances in mind. Your tax return could help pay for a dream trip to an iconic ballpark, and using the right credit cards could help lower your overall expenses.

Chicken and waffles are a Southern specialty, so it’s no surprise to find this dish in Atlanta, Georgia. Blending savory fried chicken and sweet, syrupy waffles doesn’t seem like it would make sense at first, but the combination works — and it works well.

So well in fact that Truist Park concessions like serving it up in the form of a boat. You get a nice “boat” of powdered waffle that contains boneless fried chicken pieces tossed in a hot mango habanero sauce. It also gets topped with chopped pecans and honey, because why not? Enjoy it with a side of curly fries and be prepared for endless cravings for the rest of your life.

You might think the Fenway frank is just a normal hot dog, but its place in Boston folklore has raised it to legendary status and beyond. It’s believed to have been sold at Fenway since the park opened in 1912, and it’s currently available at grocery stores under the Kayem Foods brand.

This classic dog is boiled and gently grilled to give you both flavor and texture. It’s then served in a split-top hot dog roll and the condiments are up to you. There’s no wrong way to dress your frank, so go to town with the relish and mustard if that’s how you like it.

You’re sure to find a Chicago dog at Guaranteed Rate Field, and you should, but don’t miss out on the smothered fries either. French fries alone are often sufficient enough to pass themselves off as a meal. But once you start topping them with other delicious ingredients, there’s no need to grab dinner after the game.

Choose from Buffalo chicken fries, chili cheese fries, parmesan fries, Greek fries, Irish fries, and even a sweet potato fries dish covered in Nutella, chocolate, nuts, and whipped cream. Besides finishing a plate of these, the hardest part might be choosing which one to get.

If there’s a time and a place to indulge your sweet tooth, it’s likely at a ballpark enjoying a ballgame. Especially if you happen to be at the Great American Ballpark, where one of their dessert offerings is straight out of a child’s wildest dreams.

Meet the candy cloud waffle cone, a creation of waffle cone, cotton candy, soft-serve ice cream, and sprinkles all mixed together. The name is magical and it’s sure to be a refreshing treat on a sunny day.

The Braves may have their chicken and waffles boat, but the Astros have a BBQ funnel cake. It follows a similar idea of blending sweet and savory, but here you get a deep-fried funnel cake topped with loads of Texas barbecued meats. These include pulled pork, chopped beef, and smoked sausage plus a citrus kale black-bean slaw and plenty of mustard barbecue sauce.

Oh, Mexican street vendors, we thank you for your excellent additions to the culinary world, including esquite. You may already be familiar with elote, which is grilled corn on the cob, typically covered in creamy mayo, cheese sauce, and chili powder. Esquites are basically the same thing, but served in a cup (or mini Dodgers helmet!) instead of on the cob. Expect to get your grilled corn covered in mayo, cotija cheese, lime juice, and Tajin seasoning.

If you’re going to make classic concession foods your own, then you better go all the way, like in the case of the bratchos at American Family Field. It sounds like nachos, and it may even resemble nachos, but there’s actually a lot that’s different about this Wisconsin-inspired dish.

Bratwurst, a Wisconsin staple, finds its way onto a heaping pile of kettle chips along with multiple other types of sausage, sauerkraut, pico de gallo, jalapeños, sour cream, and loads of nacho cheese. For a team named after beermakers, this sounds like the ideal pub food to soak up some alcohol.

If you’re visiting The Big Apple and catching a Yankees game, don’t miss out on the Lobel’s stand in section 134. The steak sandwich is their hallmark, and it features prime USDA sliced beef smothered in homemade gravy and served on a fresh brioche bun. And although Lobel’s sells different cuts of meat online, Yankee Stadium is the only location that makes and sells its steak sandwich and other types of sandwiches.

What’s included in a classic Philly cheesesteak will depend on whom you talk to, but it’s typically some variation of sliced beef and cheese on a hoagie roll. The beef is often sliced thin, like at a deli, and Cheez Whiz cheese is commonly used. Other additions, including peppers and onions, are optional, but frequently recommended. Citizens Bank Park has multiple cheesesteak vendors, so don’t fret if you need your gooey meat and cheese fix but there’s a long line at one vendor.

How often can you get tasty barbecued meat dishes served to you by a former MLB player? And not just any MLB player, but 3x All-Star and 2x World Series champion Manny Sanguillén, a former catcher for the Pittsburgh Pirates.

Manny is often around his barbecue stand during games, serving up dishes like pulled pork sandwiches and burgers. Sometimes you might be able to order a special treat, like the pulled pork pierogi stacker. It’s a big pulled pork sandwich, with the edition of a few pierogies inside to really enhance the culinary experience.

Cardiff-by-the-Sea, California is located north of San Diego and is home to Seaside Market, a gourmet grocery store that sells a popular form of tri-tip. In fact, the tri-tip is so popular that it earned the nickname of “Cardiff Crack,” mainly because it’s so good you might get addicted.

You can order the tri-tip whenever you want from Seaside Market, but getting it freshly prepared on top of a plate of nachos only happens at Petco Park. The plate combines tortilla chips, barbecue sauce, sour cream, cheese sauce, and of course, the signature mound of tri-tip for a unique culinary experience you won’t soon forget.

Caribbean barbecue might seem out of place in Oracle Park because it’s not the type of food you would associate with San Francisco. But good food doesn’t have to be local to be enjoyed. And the cha cha bowls from Orlando’s Caribbean BBQ have won over the hearts and taste buds of many a Giants game attendee. The famous cha cha bowl consists of grilled chicken or pork carnitas over rice and beans and topped with a pineapple-zucchini salsa.

Toasted grasshoppers, or chapulines, have been offered at the Mariners’ stadium since 2017, and they’re a huge hit. They’re sourced from the Oaxacan region of Mexico by the Poquitos restaurant in Seattle and served in a chili-lime salt seasoning. It might sound strange to eat insects at a ballgame, but their popularity can’t be attributed to curiosity alone.

There’s something immensely satisfying about eating a dish in an area where it originated. It just feels right. This is why having a Cuban sandwich at Tropicana Field in South Florida makes sense. South Florida is known for its diverse culture, including a heavy Cuban influence. And it doesn’t hurt that Cuban sandwiches are delicious. Roast pork, ham, salami, swiss cheese, pickles, and mustard on ciabatta bread sounds like the perfect way to enjoy an afternoon ballgame.

Brisket egg rolls. Let that sink in for a moment. It’s the combination we never would have thought of but always wanted. Deep-fried goodness paired with classic Texan brisket is just what the doctor ordered. Just not any doctor you’ve ever heard of.

This ballpark food at Globe Life Field beat out multiple other options in an online fan poll, including a steak-and-cheese stuffed poblano pepper and a deep-fried ball filled with brisket, cheese, and jalapeños. However, all three options sound delicious.

Whether you’re planning to enjoy takeout at home or concessions at the ballpark this baseball season, be sure to use a credit card that will reward you the most for your purchases.

Earning rewards is an easy way to take some of the sting out of pricy foods, whether you plan to use those rewards for cashback or to offset the cost of a future vacation. Keep in mind that many cards offer multiple benefits, so be sure to compare credit cards to find ones that suit your lifestyle and financial goals.

This article originally appeared on FinanceBuzz.com and was syndicated by MediaFeed.org.

Republished with permission by SouthFloridaReporter.com on April 16, 2022