Not long ago, the family sedan was the standard bearer of the auto industry.  It’s where we Americans turned for our next ride and the competition was fierce.  But as cars continue crossing over into SUVs the significance of the midsize sedan has been greatly diminished.  Yet for those of you who have kept the candle burning, the choices may have been reduced but the vehicles themselves are better than ever.  Case in point; the car formerly known as the Optima – this is the all-new Kia K5.

When it comes to actual cars, few automakers have you covered quite like Kia: Rio, Forte, Stinger, Cadenza, K900 and now K5…from 16 to 60 grand there’s something in there for everyone.  And this one is the middle child.  You could think of it as a front-wheel drive Stinger with its similar sport sedan look and feel.  Long gone are the days of boring in this class – now, you’ve got to bring it both in style and drive.

The K5 is offered in 5 trim levels and I’ve got the 2 most interesting…well, at least until the racier GT arrives later this fall.  This GT-line is characterized by its sporty appearance, legit performance tires, and optional all-wheel drive.  It’s the K5 with the most attitude and it starts at $26,355.  Meanwhile, this K5 EX takes on a more luxurious, mature persona with a standard panoramic sunroof, heated and ventilated front seats, sat radio, an optional 12 speaker Bose audio system, and a wireless device charger.  It starts at just under $29,000. 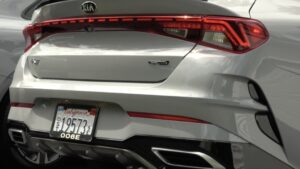 As is the new normal during the pandemic, product launches are done in a hit and quit it style on your home turf for 24 hours so I’m driving both of these K5s to explore their unique flavors with a tropical storm thrown in just for fun.  But frankly, they’re not as different as you might think.  Mechanically, these 2 are identical right down to the Pirelli rubber.  So though the GT-Line likes to flaunt its stuff it doesn’t possess any superpowers…there’s not even any paddle shifters in this model…a rare Kia misstep.  Both are powered by a Hyundai/Kia staple; the energetic 1.6-liter turbo-4 mated to an 8-speed auto producing 180 horsepower and 195 pound-feet of torque.  The Sonata’s base 2.5-liter engine is not on the menu over at Kia.  And I mention the Sonata because it is this car’s corporate twin.  But the K5 is much more attractive than the new Sonata and offers some goodies that the Hyundai doesn’t and vice versa such as all-wheel drive and wireless CarPlay.  As for a hybrid variant, Hyundai has the exclusive at least for now. 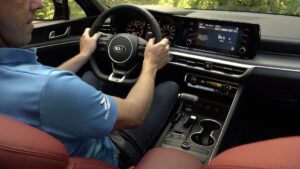 The most notable difference between this K5 and the Hyundai Sonata Limited I tested earlier this year lies where the rubber meets the road.  While the Sonata came with Michelin Grand Touring tires this K5 comes equipped with Pirelli P Zero ultra-high performance all seasons.  This leads to a more athletic drive with improved steering feel without any degradation in ride quality or quietness.  Its handling is impressive for a front-drive car making it a lot of fun to drive.

This is a beautiful drive with quick hitting torque, Smart and Sport drive modes, and reactive gear changes.  It’s a delight to take on your favorite backroad without ever feeling overdone…if you indeed want some of that the Stinger will gladly oblige.  The K5 feels composed, premium and sophisticated in all situations. 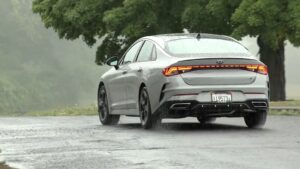 Kia has long since been really good at ergonomics. They know just how to make you comfortable and do a perfect job of integrating their vast features in a simple and intuitive manner. And the K5 EX is a perfect example – with all of the controls exactly where you’d expect them and electronics that you can use without an owner’s manual. The only oddity is that with the Premium Package you don’t get Wireless no CarPlay…that’s only available with the smaller screen. And I was expecting to see a heads- up display.

This EX has memory settings, a power passenger seat, HVAC vents in the rear, a heated steering wheel and more robust safety tech.  And the big touchscreen offers a deeper dive into electronic features including these mood settings which I’m a real sucker for.  On both cars, I really like the placement and design of the wireless phone charger but the Sonata’s Surround View Monitor is absent. 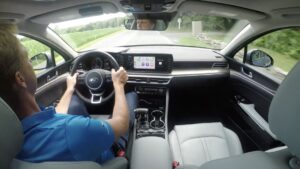 Another thing Kia likes to do that gives their vehicles an advantage is to upsize them. So though it competes in the midsize class the K5 provides a large car rear seat room and trunk space.

At 16 cubic feet, this is as big as Kia’s trunks get and both cars have Smart Trunk as standard.  As usual or Kia, the feature content is very high with both the GT-Line and EX punching well above their weight, never leaving you feeling like you’re missing something you want while putting your neighbor’s Lexus to shame in terms of modernity. 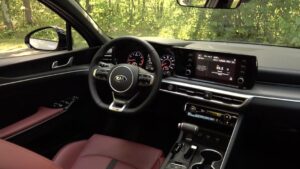 The GT Line is the one for me. I prefer the more assertive styling, the red interior, and this upcharge Wolf Gray paint looks amazing. And I could live without the handful of goodies it lacks when compared with the EX. Plus, this one has wireless CarPlay – one of my favorite features. 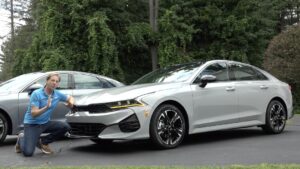 As tested with the Premium Packages on both, this GT Line checks in at a very palatable $28,400 while the EX adds more of the good stuff for $32,355.  Gas mileage is rated at 31mpg in combined driving and an eye-opening 38mpg on the highway. 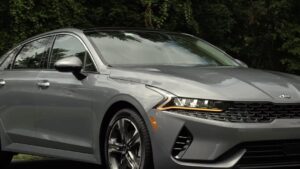 So the K5 comes out of the gate with a new name, spunkier attitude and more polish.  It’s said you never get a second chance to make a first impression and this one has been stellar.  And that full-fledged GT model coming in November should be a real treat.