When I first tested this car 3 years ago I was blown away by its handling and acceleration declaring it a performance sedan juggernaut the likes of which I had never before experienced. But a less than cabin and dated electronics kept me from fully embracing this Italian beauty.  But now, those issues have been resolved making the Giulia Quadrifoglio the most lusted after car in its class.

About $40 grand will score you a base model Giulia – Alfa’s only sedan offering. 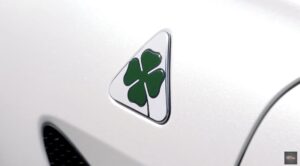 But if you spot one with a shamrock you’re looking at the rare, high-performance Quadrifoglio.   With midsize proportions, rear-wheel drive platform and near 50/50 weight distribution this is the uncommon, sporty, seductive alternative to cars like the Audi S6. 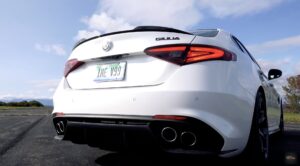 But unlike its closest competitors, this Alfa uses its rear wheels only, and oh yeah; it’s more muscular and faster. 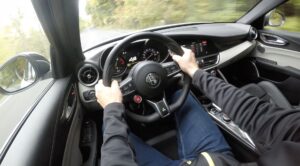 505 horsepower, 3.8 seconds to 60mph and unlike the Germans whose designs have become somewhat ordinary,  this Giulia, in Trofeo White with dark 5-hole wheels and Carbon Fiber Package looks amazing. 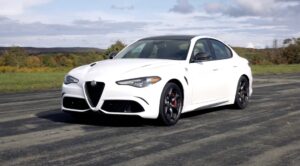 It’s been turning heads and getting compliments all week.  You just don’t see many of them but that also speaks to a potential problem; not enough Alfa dealerships.  My area no longer has one and the nearest is out of state. 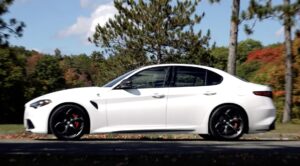 So this Giulia is pretty much what you imagine a racy, Italian sedan to be: bold, boisterous and perhaps, a little high maintenance. New for 2020 there’s an improved touchscreen infotainment system with Apple CarPlay, Android Auto and enhanced performance pages, a host of connectivity features including WiFi and a mobile app that allows you to control certain car functions, the addition of modern driver assistance features such as the semi-autonomous highway assist and traffic jam assist which do some of the driving for you in select situations, a center console with larger cupholders and increased storage, a wireless charge pad and an updated carbon fiber steering wheel design.  It’s not a major update by any stretch but it does address the Giulia’s most pronounced shortcomings making it a more complete luxury sports car.  You’re not getting the immersive, light, sound, smell and graphics show the Germans are flaunting these days but you are getting enough high-end convenience, comfort and safety features to make this much more of an attractive buy. 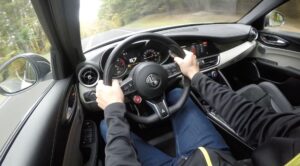 Plus, this car drives like it was born to dominate.  Close your eyes and listen to it go by and you might think it’s race day at the track. 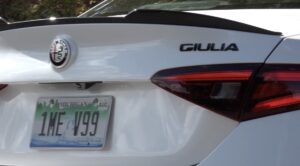 This Giulia still satisfies like it did 3 years ago, marked by its Ferrari-derived sounds, race car quick gear changes and warp speed turbo boost.  The seats have adjustable side bolsters to keep you as well planted as the car itself.  Now, from a standstill the turbos take some time to get working but once they do you’d better be ready.  But the nose keeps pointing forward as long as you leave the traction and stability control systems on.  Once off, and you can have your tail wagging hijinks.  It’s a really fun car on your favorite roads but I’m a little concerned about how it would hold up for track days. 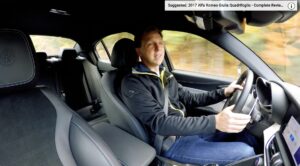 After just a few high speed runs the engine overheated and caused us to back down for a while. That doesn’t bode well for the owner who has track day aspirations.  Unlike my last Giulia, there are no carbon ceramics here but the brakes continued to feel solid after a number of hard stops so I hope this temperature warning light was just an anomaly but then again my last tester had some issues too. 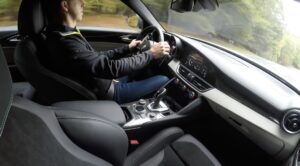 The DNA Drive Mode Selector is the conduit to how you want the Alfa to feel.  It’s equipped with a Race mode that activates the turbo’s over-boost function, turns off stability control, opens up the exhaust, and sharpens all of the other driver controls.  And the torque vectoring differential keeps the rear tires digging in while powering out of a turn.  Advanced Efficiency and Natural settings are perfect for calm, in-city, family-type driving and just as I remember it; this Giulia accomplishes those situations with aplomb. It’s not a car that has to be driven fast to be enjoyed.   The cabin is quiet and the active damping suspension is quite palatable in its softest setting but you’ll still feel plenty of the road.  It only goes full firm mode when in Dynamic or Race, but even then you can back it off with a push of a button.  With the ability to run on just 3 cylinders, gas mileage is rated at 17mpg city/25mpg highway. 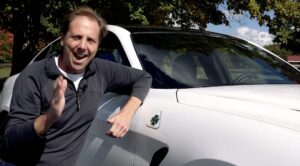 So what’s this 4 leaf clover all about?  Well, back in the 1920’s there was this…oh, I’ll just have a true Italian tell you the story.

Just about all of the things I dinged the Giulia’s cabin for the first time around have been remedied here. Though it’s not UConnect like you might expect, the infotainment system is bigger and much improved in its operation. The console’s layout is cleaner and easier to use and the feature content has been pumped up. Plus, with this white and green stitching, it just looks cool.

$74,500 is the base price while this one, loaded with just about everything Alfa offers on this car, comes in at $86,145 or an about $1,100 per month lease.  Petite, powerful and pretty with a patented paisan soundtrack, the Giulia Quadrifoglio speaks to me.  It’s the one I’d want in my garage if a true driver’s sedan was calling. Transform Your Commercial Properties with these Flooring Tips