When the Defender’s 67-year production run ended in 2016, it had already been nearly 2 decades since one could be found in a U.S. Land Rover dealership.  The 1997 Defender 90 with its 4.0-liter V8, 4-speed auto, and 13mpg was a British-born Jeep rival.  But since, Land Rover’s SUV lineup has trended more towards afternoon tea and less to morning fox hunts.  The Defender’s much anticipated return is finally here to recapture some of the original’s raw ruggedness with modern day accoutrements. 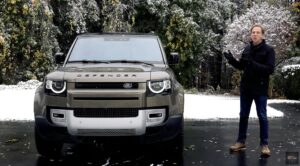 Spurred by low gas prices, choking traffic, and an insatiable appetite for SUVs, the off-road vehicle movement has never been riper.  I’m talking about the real capability that can get you away from all the craziness; from trucks to sport utilities there have never been so many competent choices. 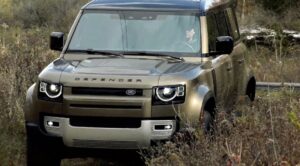 Enter the new Defender – a modern interpretation of the iconic original.  The days of needing body-on-frame construction and solid axles to prove your off-road mettle are passé. This Defender is modern, smart, and everyday luxurious while being respectful to its past. 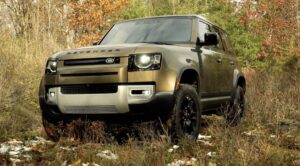 It’s purpose-built for off-roading but that’s not its only personality trait.  Made from an all-new aluminum unibody Land Rover says is the stiffest platform they’ve ever created underpinned by a fully independent air suspension that bests a Wrangler Rubicon in ground clearance and hangs with it in other critical off-road geometry. 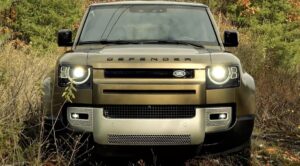 It pairs a full-time 4-wheel drive system with a sophisticated Terrain Response System replete with automatic center and rear lockers making off-roading an absolute breeze.  The electronics are amazing and configurable beyond the numerous pre-programmed surface types; I just wish the Terrain Response controls weren’t shared with the climate buttons and knobs over here at a decent reach from the driver.  You can view the selections on the center screen or right here depending upon how you’ve configured the display.

With these optional new Goodyear Wrangler Adventure tires, this Defender makes mud, ruts, and rocks seem like a mere inconvenience.  And as long as the side view mirrors are extended, the wade sensing system is an amazing technology that visually communicates how deep the water is.  I’d love to show you even more of it but my GoPro is somewhere down there with the frogs.  Maybe I can find it next spring.

You might wonder what this area here is designated for…well, it’s where you can attach the optional side-mounted gear carrier or maybe a roof ladder.  Land Rover has gone above and beyond with their dizzying array of options and accessories.  If you love going online and configuring vehicles the Defender is your happy place…And the level of customization is off the charts. 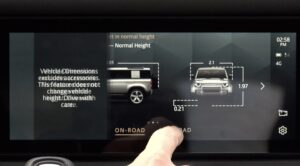 From a built-in air compressor to dog bowls to a hose to wash off muddy gear, building your Defender couldn’t be more fun or complete.  Surprisingly, Land Rover hasn’t made any of these fun items available on this press vehicle but go to their retail site to learn more. 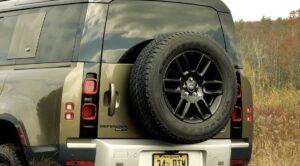 The rear-mounted spare, swing out door, alpine lighting, exposed fasteners, deep floor liners, lots of little cubbies, and restraining straps; the Defender isn’t a luxury SUV pretending to be an off-roader – this is the real deal and ready for upscale adventure. 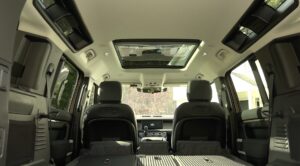 The cabin is utilitarian yet capable of carrying its $73,000 asking price.  Mine is a 5-seater though 6 and 7 seat configurations are available.  And this one is pretty loaded with the optional bits such as the panoramic roof, sat radio, adaptive cruise control, heated steering wheel, and heated memory front seats.  But the one thing I’m learning about the Defender is that its ergonomics aren’t the best. 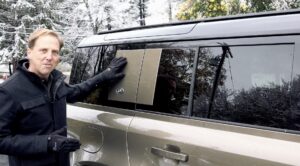 First, the smart key buttons on the door handles are on the wrong side, the grab handles integrated into the dash as opposed to up high provide no leverage and without running boards this can be a big step up depending on where the suspension is set, the cruise control settings are confusing and should be on the left with the volume dial over on the right and the shifter is kind of in the way of the lower touchscreen.  The rear door is really heavy to swing and there’s no wireless CarPlay or Android Auto but there is a wireless charge pad over here away from the connection ports all reducing the Defender’s Zen.  And while I’m nitpicking, a vehicle like this should have a head-up display as standard because following the 4X4 info over here while you’re trying to pay attention to your surroundings makes no sense. 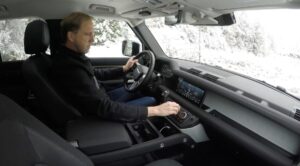 This here is the Defender 110 SE with the step-up mild-hybrid turbocharged inline-6 producing a robust 395 horsepower and 406 pound-feet of torque; good for a spirited takeoff to 60mph in 5.8 seconds.  The ZF 8-speed is the best in the industry and includes a sport mode with manual shifting but no paddles.  Expect 19mpg on premium.  And towing is maxed at a capable 8,200 pounds. 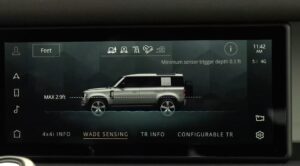 The turbo adds plenty of zip to this V6.  I think you’ll be surprised how quickly the Defender moves. It’s also quiet and the air suspension makes for a very smooth ride.  So even though this is a serious off-road machine, it’s not plodding or unrefined on-road, even with these optional all-terrain tires.  But both the throttle and brakes are really jumpy making it difficult to drive deftly around town.  And those are unwelcome characteristics out on the trail, but luckily Terrain Response helps even them out.

This is the first Land Rover to introduce this next-gen braking system which feels much better out here than it does in around the town driving where it gets grabby until you learn how to adapt your right foot pressure.  But its pedal-activated hold feature is very convenient. 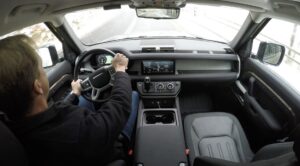 The new infotainment system kind of floats on the tunneled out dash and is a big step-up from previous Land Rover systems.  It’s fast and more intuitively programmed with smarter voice recognition.  I just wish the various camera views were clearer…there are plenty of angles to access but they’re graphically ambiguous. 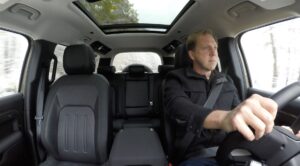 The seats are comfortable and I appreciate that they’re not leather and the rear seats, which do get proper grab handles, offer big space even though there’s no adjustability.  There are lots of clever connection points, too.  And then with the cargo area, it’s tall and accessing it can be lowered with the air springs, offering generous carrying capacity when the rear seat bottoms are tumbled forward and the surface completely flattened.  Again, plenty of available accessories to customize this space if you so desire. 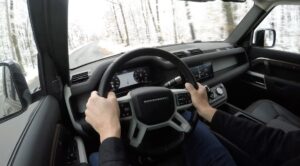 This P400 model starts at about $62,000 and then with the Driver Assist, Climate and both Off-Road packs in addition to a handful of other standalone options comes in at $73,043.  It looks amazing in this Gondwana Stone paint and its boxy, determining design hits all of the marks of an off-roader.  By in-large it drives as confidently on-road as it does out here, where it feels like the boss you’d expect.  The shorter 2-door Defender 90 has been delayed but is coming next year.  Until then, this is a big winner for Land Rover and should excite the Defender’s fan base.