Following its record-breaking 2019 Scottsdale Auction, Barrett-Jackson, The World’s Greatest Collector Car Auctions, announced today that it has sold out its docket for the 17th Annual Palm Beach Auction April 11-13, 2019 at the South Florida Fairgrounds. Setting a new record as the company’s largest 3-day Palm Beach Auction to date, Barrett-Jackson has consigned over 600 vehicles, which cross the block ? nearly all at No Reserve. 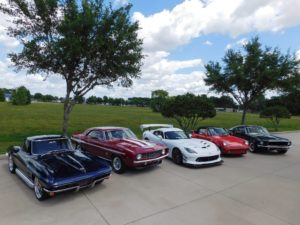 “We’ve hit another exciting milestone in Barrett-Jackson history,” said Craig Jackson, chairman and CEO of Barrett-Jackson. “This year’s Palm Beach Auction will hit new highs with a record-setting 600-plus collector vehicles on the docket. The high caliber of vehicles we consigned in Scottsdale is continuing in to Palm Beach, thanks to our consignors and our hard-working, dedicated team of specialists. It’s also a testament of the growing demand and vibrancy of this incredible hobby.”

Barrett-Jackson will sell 16 vehicles, all at No Reserve, from the renowned William “Chip” Watkins Collection. Over the last decade, Barrett-Jackson has become a magnet for prominent collectors seeking to buy and sell vehicles. The Chip Watkins Collection features 16 vehicles, representing seven decades of automotive performance, including a including a 1958 Chevrolet Corvette Custom Roadster (Lot #748) featuring an LS2 engine, Corvette C4 polished suspension with coilovers, power disc brakes and a Dana 44 rear end.

“From classic Resto-Mods  to  low-mileage future classics, the Chip Watkins Collection represents an enviable diversity of performance vehicles,” said Craig Jackson, chairman and CEO of Barrett-Jackson. “Not only does the collection represent a seven-decade span of makes and models, but the quality of each vehicle is unsurpassed as well. For anybody looking to add an incredible vehicle to their garage, the Chip Watkins Collection should be on the must-see list during our Palm Beach Auction.”

Classic American performance vehicles from the Chip Watkins Collection include an unmolested 1969 Shelby GT500 (Lot #689) that has been in the care of the Watkins family since it was originally purchased in 1969. It has less than 35,400 original miles and includes the original Shelby owner card, copy of the Shelby work order, Window Sticker and the door/data tag. Another offering is a 1964 Chevrolet Corvette (Lot #734),a beautiful example of a no-expense-spared Resto-Mod that competed in the SEMA Battle of the Builders 2015 and has been stored in a climate-controlled collection since completion. 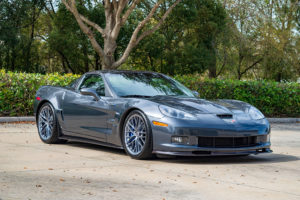 Low-mileage future classics, such as a rare 1996 Chevrolet Grand Sport (Lot #361), will also cross the block. Commemorating the 1963 Grand Sport racing cars, this example is number 34 of only 810 coupes produced and shows only 1,490 miles on the clock. Also featured is a 1980 Chevrolet Camaro Hugger Z/28 (Lot #339). Designed with the help of GM Vice President of Design Bill Mitchell, this example is number 32 of only 90 Huggers manufactured in 1980.

The Chip Watkins Collection also includes a 1972 Datsun 240Z (Lot #132) that is originally from Southern California and has been fully restored, including a rebuild of the original L24 engine. In addition to restored and new engine parts, the restoration included a complete refinish of the body. For those who enjoy German engineering, a 1989 Porsche 930 (Lot #727) in the collection was a one-year-only production car with a 5-speed manual transmission.

From Thursday, April 11, to Saturday, April 13, over 600 vehicles and 300 pieces of automobilia will cross the block starting every day at 9 a.m.

“Our Palm Beach Auction will build on the massive energy we generated in Scottsdale,” said Steve Davis, President of Barrett-Jackson. “We work diligently to bring the best dockets imaginable to our bidders. We have gathered a diverse collection of vehicles that offer a little bit of everything for every level of collector. And beyond the block, we’ve created the ultimate lifestyle event that offers something the entire family can enjoy.”

By TestDriveNow for SouthFloridaReporter.com, April 11,2019