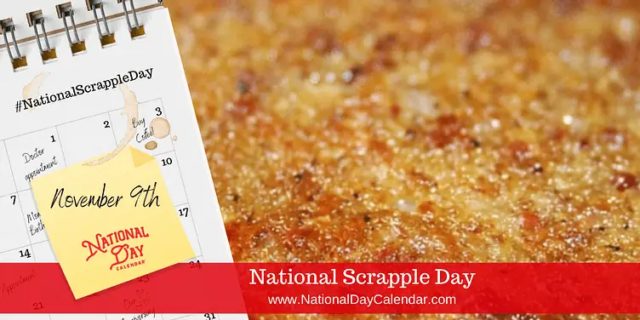 National Scrapple Day is observed annually on November 9th. Scrapple is arguably the first pork food invented in America. For those who are not familiar with scrapple, which is also known by the Pennsylvania Dutch name “pon haus“, it is traditionally a mush of pork scraps and trimmings combined with cornmeal, wheat flour, and spices.  (The spices may include, but are not limited to: sage, thyme, savory and black pepper.)  The mush is then formed into a semi-solid loaf, sliced and pan-fried.

The Bloody Mary is the US’s most popular alcoholic drink for brunch.

12 percent of people fall asleep before the clock strikes midnight

65% of Americans would support bacon as the National Food

Do You Know The Difference Between Soup And Stew? Answer Below

Las Vegas Uses Over 27 Million Decks Of Cards Every Year

Want daily news updates? Just add your email and you’re on the list. (We will never spam you).

Do You Have Financial Anxiety About the Coming Year?

A Few Showers In The East Coast Metro Area & Patchy...

AAA: Florida Gas Prices Surge; Up 17 Cents from a Week...