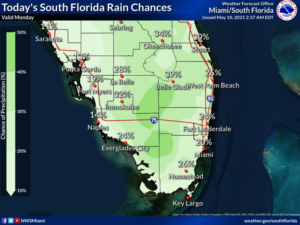 Monday features lots of sun, clouds at times, and some afternoon showers with maybe a storm in spots.  A moderate risk of dangerous rip currents is in place at the Atlantic beaches.  Highs on Monday will be mostly in the upper 80s in the east coast metro area, with some inland locations reaching 90 degrees.  Highs will be near 90 degrees along the Gulf coast on Monday.

Tuesday will bring plenty of hot sun with some clouds and a few showers and maybe a stray storm in the afternoon.  Tuesday’s highs will be mostly in the low 90s.

Wednesday will see good sun, some clouds, and a few afternoon showers in spots.  Wednesday’s highs will be in the low 90s.

Friday’s forecast calls for a mix of sun, clouds, and showers, with a few storms in spots.  Highs on Friday will be in the upper 80s.