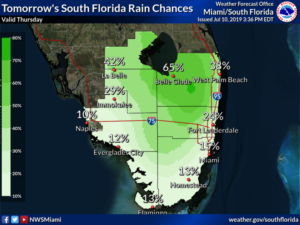 South Florida will see a summer day of sun and storms on Thursday, while the northern coast of the Gulf of Mexico gets ready for a tropical system that is expected to make landfall on Saturday.  Here at home, Thursday features a mix of sun and clouds with passing showers and storms in the afternoon.  Look for the Gulf coast and interior to see more widespread activity.  Highs on Thursday will be in the low 90s, but it will feel like the triple digits.

Friday will bring cloudy skies to the east coast metro area and a mix of sun and clouds to the Gulf coast, but everyone will see periods of showers and storms.  Friday’s highs will be in the low 90s.

Saturday will feature clouds, showers, and storms along the Gulf coast, while the east coast metro area will see a mix of sun and clouds with the chance of a few showers.  Saturday’s highs will be in the low 90s.

A mix of sun and clouds with passing showers and storms are all in the forecast for Sunday.  Sunday’s highs will be in the low 90s.

Monday will feature good sun, some clouds, and passing showers and storms, mostly in the afternoon.  Highs on Monday will be in the low 90s. 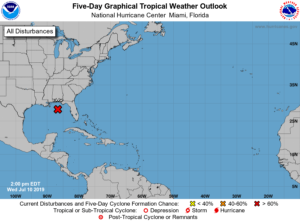 Potential Tropical Cyclone 2 is expected to develop into a full-blown depression or tropical storm at any time on Thursday.  At 5 am Thursday, Potential TC 2 was located near 27.5 North, 88.2 West, and was moving west at 5 miles per hour.  Maximum sustained winds were 30 miles per hour.  A hurricane watch is in effect for the Louisiana coast, and the system is expected to make landfall there on Saturday, most likely at hurricane strength.  Storm surge flooding will be a threat at the coast, but the biggest threat from this system is extremely heavy rainfall — on top of flooding rains that New Orleans received on Wednesday.By Donna Thomas, SouthFloridaReporter.com, certified Meteorologist, July 11, 2019