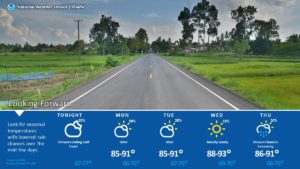 Monday features good sun, some clouds at times, and passing showers, especially in the afternoon.  A high risk of dangerous rip currents and tidal flooding are expected at the Atlantic coast at least through mid-morning on Monday.  Highs on Monday will be mostly in the upper 80s.

Tuesday will be mostly sunny with just the chance of a shower.  Tuesday’s highs will be in the mid 80s.

Look for good sun with a few clouds and showers on Wednesday.  Wednesday’s highs will be in the upper 80s.

Thursday will feature a mix of sun and clouds with afternoon showers and storms, especially in the east coast metro area.  Thursday’s highs will be in the mid 80s.

Friday’s forecast includes a mix of sun and clouds with more widespread showers and storms.  Highs on Friday will be in the mid 80s. 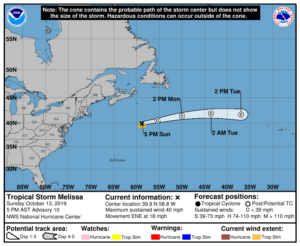 We’re still watching Tropical Storm Melissa as it accelerates away from the North American coast.  At 5 am Monday, Melissa was located near 40.7 North, 54.0 West, and was moving east-northeast at 20 miles per hour.  Maximum sustained winds were 40 miles per hour.  Melissa is forecast to dissipate in a day or so, leading to a gradual weakening of the swells and coastal flooding it has been generating from Florida northward to the Maritime Provinces of Canada. 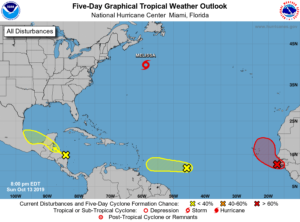