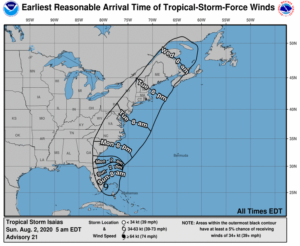 The center of Tropical Storm Isaias is just off South Florida’s east coast early on Sunday.  We’ll continue to see gusty winds and some downpours from this system during the day as conditions slowly improve from south to north.

At 5 am Sunday, Isaias was centered near 26.3 North, 79.5 West, about 45 miles southeast of West Palm Beach.  Maximum sustained winds were 65 miles per hour, and Isaias was moving slightly north of northwest at 9 miles per hour. 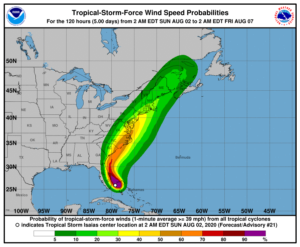 The northwestern Bahamas continues to experience the strongest winds and heaviest rain from Isaias early on Sunday.  A hurricane warning remains in effect for Bimini, Grand Bahama Island, and the Berry Islands.

South Florida might be spared from serious impact, but Isaias isn’t done with the U.S.  It’s forecast to hug the Florida east coast on Sunday and Monday and then make landfall in the Carolinas on Tuesday as a tropical storm.  From there, it will accelerate across the mid-Atlantic and New England before dissipating in Canada early on Thursday. 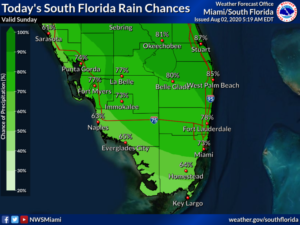 Here in South Florida, Sunday’s forecast features periods of gusty winds and downpours to start in the east coast metro area.  Then conditions improve as the day progresses.  The Gulf coast will see a mix of sun and clouds with periods of showers and storms.  Highs on Sunday will be near 90 degrees.

Monday will bring partly sunny skies to the Gulf coast, plenty of clouds in the east coast metro area, and widespread showers and storms everywhere as we deal with the “tail” of Isaias.  Monday’s highs will be in the low 90s.

Tuesday will feature a mix of sun and clouds along the Gulf coast and lots of clouds in the east coast metro area.  All of South Florida can expect periods of showers and storms.  Tuesday’s highs will be mostly in the upper 80s.

Wednesday will be another day of widespread showers and storms.  We’ll also see some sun but more clouds.  Wednesday’s highs will be in the low 90s.

Thursday’s forecast includes clouds, showers, and storms.  Highs on Thursday will be near 90 degrees. 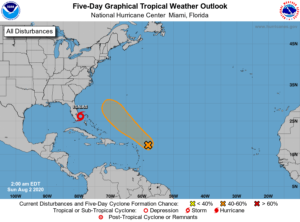 We’re also keeping an eye on the rest of the tropics. What was Tropical Depression # 10 is now a remnant low in the eastern Atlantic.  The wave in the central Atlantic has a medium chance of developing into a depression during the next 5 days.  This feature is forecast to take a turn to the northwest and then north, remaining well east of Florida.