No Escaping The Heat For Florida 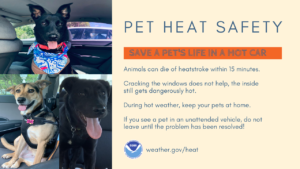 Saturday features more sizzling heat, with plenty of hot sun and hazy skies. A late day storm is possible along the Gulf coast.   A moderate risk of dangerous rip currents is in place at the Atlantic beaches this weekend.  Highs on Saturday will be in the low 90s right at the Atlantic coast and the mid 90s everywhere else.  But it will feel about 10 degrees hotter, so stay out of the sun and drink plenty of water.

Sunday will bring good sun, a few clouds, and the chance of an afternoon shower or storm.  Sunday’s highs will be in the low to mid 90s in the east coast metro area and the mid 90s along the Gulf coast.

Monday will feature a mix of sun and clouds, with showers and storms developing in the afternoon as more moisture moves into our area.  Monday’s highs will be in the low to mid 90s.

Tuesday will be another day of partly sunny skies and afternoon showers and storms.  Tuesday’s highs will be in the low to mid 90s again.