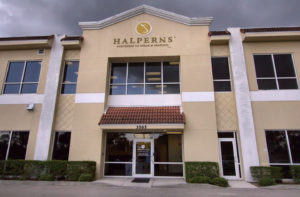 ACF offers educational, training, certification and charitable resources to members and publish a number of online periodicals such as The National Culinary Review.

One of the chapters in Southwest Florida is the ACF Caxambas Chapter of Naples and Marco Island, or ACF Naples Chefs (ACFNC). With the exception of most winter months, ACFNC holds a monthly chapter meeting. In July 2018, the monthly meeting was held at the Naples branch of Halperns’ Steak and Seafood.

Halperns’ story is very interesting as noted in The Atlanta Jewish Times. If you are not into links, the founder of the company, Howard Halpern started all of this in Atlanta in 1966. They provided produce to a newly found restaurant chain, Burger King. After realizing the low margin in produce, Howard started Buckhead Beef in 1983, and the company was bought by the food distribution conglomerate, Sysco, sixteen years later. Howard was into family-run food distribution, and started Halperns’ Steak and Seafood in 2005. The company has since been bought out by Gordon Food Service, a private concern, though still retains it’s original name. 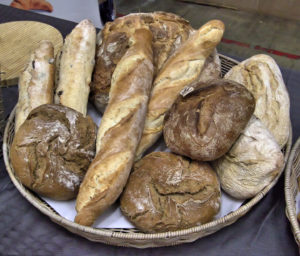 The meeting featured a number of vendors both in, and out of the rubric of Halperns. It was an informal meeting to sample the many wonderful wares of it’s host and other independent vendors.

Although not all inclusive, here were some of the offering to attendees.

They had a impressive display of baked items, including a wonderful selection of their proprietary breads.

These included French baguettes, Andalusian flat bread and rustic crust breads. All of these were really great. A number of really good cookies, cupcakes and muffins were also available to be sampled. 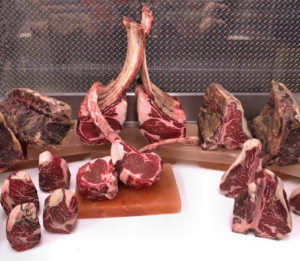 From right to left are bone in rib eyes, the short loin, where T-bones and porterhouse steak come from, tomahawk rib eye, bone-in New York strip and boneless New York strip. Dry aged meats are aged at 75% humidity and 36 degrees F for about 6 weeks. It all looked really good and I couldn’t wait to try some of the cooked versions of these.

There were some wonderful hamburgers to be sampled called “CBS” burgers. These were a mixture of chuck, brisket and short rib and were quite good.

There was also a sampling of Halperns’ dry aged prime rib.

These were a melt in your mouth flavor explosion. Highly recommended.

As participants were socializing, there was more deliciousness to be had here. 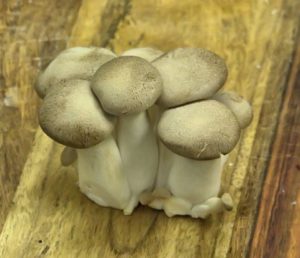 This was excellent, some of the best fish I have ever had. It tasted like it was just plucked out of the water. A friend I invited to this meeting doesn’t like fish, but loved this. I think that says it all.

As the meeting built up to a crescendo, there were a number of other foods to sample including Halperns’ mushroom offerings by Mycopia, including these beautiful Nameko mushrooms, Japan’s most popular cultivated mushroom.

There was also a good sampling of burrata and feta cheeses from Meredith Dairy, an Australian concern. The cheese samplings were very good, especially the goat/sheep blend in olive oil. Feta cheese at it’s best.

Of course, thirsty participants could wash this all down from beer produced at Naples Beach Brewery, a locally produced beer, or sip wines provided by Progress Wine Group.

This was another excellent meeting of ACF Naples Chefs highlighting great foods and camaraderie among members. From what was sampled here, if I was a commercial buyer I would definitely try out their product in real time.