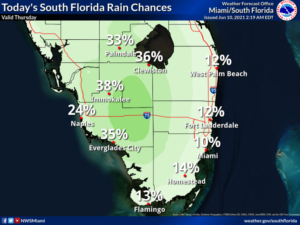 Thursday features good sun and a few clouds, with some storms and showers in the afternoon, mostly along the Gulf coast.. Look for an ocean breeze near the Atlantic coast.  Highs on Thursday will be in the upper 80s.

Friday will bring day plenty of sun and a few clouds in the morning with some showers and storms developing in spots during the late afternoon.  Friday’s highs will be mostly in the upper 80s, with a few locations reaching 90 degrees.

Saturday will see a mix of sun and clouds to the east coast metro area and mostly sunny skies along the Gulf coast.  Look for some afternoon showers and storms in spots.  Saturday’s highs will be near 90 degrees.

Sunday will feature lots of sun and a few clouds in the morning and some mid to late afternoon showers and storms.  Sunday’s highs will be in the low 90s.

Monday’s forecast calls for more widespread showers and storms, along with periods of sun and clouds.  Highs on Monday will be near 90 degrees.

It’s quiet in the tropics right now.  The area of low pressure that computer runs had indicated would develop hasn’t, and the National Hurricane Center isn’t expecting any tropical development for at least the next 5 days.